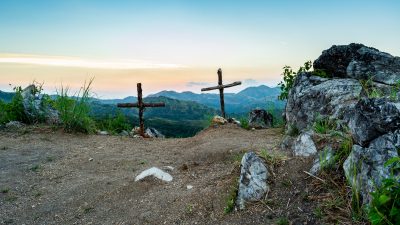 Last night I fell down the stairs at home.  Now before you get concerned and wonder if this is a cry for help, let me assure you…It’s not.  I’m just terribly clumsy.  I was wearing socks, and my socks slipped, I missed the first step and I proceeded to slide down the next 5 bumping along as I went.  My tailbone (which I fractured as a child during an unfortunate trampoline incident) took the brunt of the fall.  Thanks, tailbone!  I was a little shaken after the tumble and knew I would be sore in the morning.  This morning I woke up and everything hurts; back, shoulders, and yes tailbone.  Sitting today will be a challenge, but so will standing, cooking, and laundry.  As I began to look at the day ahead and start to complain to God for my weakness and lack of coordination I was quickly reminded of a time when someone I had yet to meet was willingly battered and bruised for me.

Jesus went to the cross for me.  For my sins, because of His great love.  I don’t know that there is anyone I would willingly fall down a set of stairs for, except maybe my own children.  Yet, what Jesus endured was much more painful than some slight soreness from a little tumble.  Then it hit me like a slap in the face, yet this revelation had been there all along.  Jesus did that for me, and for you because family is His desire.  The kind of love that I would only show to my children, Jesus has shown to all humanity because His desire is that we become family.  This concept of being a daughter of the King of Kings is something I’ve been taught in church my whole life but didn’t really grasp until I brought home my adopted daughter.

Galatians 4:4-7 says: “But when the set time had fully come, God sent his Son, born of a woman, born under the law, to redeem those under the law, that we might receive adoption to sonship.  Because you are his sons, God sent the spirit of his Son into our hearts, the Spirit who calls out, “Abba, Father.”  So you are no longer a slave, but God’s child; and since you are his child, God has made you also an heir.”

A friend recently asked me, “How did adoption change your faith?”  Adoption has opened my eyes to a love that before was only theoretical but now has become my daily reality.  Every morning I greet my sweet daughter who did not grow in my womb and ask her, “How was your sleep?”  I don’t for a second look at her and think that she is somehow less than or that she isn’t a full member of our family.  She may look different but in my eyes, she is a full heir.  Before we adopted, my husband and I worked on some things with a local estate planner just to make sure everything was in order.  One of those things was a living will.  Even before we brought home Hadassah we made sure there was language in that legal document that would guarantee any children added to our family whether biological or adopted would receive a full share of any inheritance we might have.  Not only in our hearts but in the eyes of the law she is a “full heir”.  So when we brought her home and I read that passage from Galatians 4, I was overwhelmed with the revelation that I too am a full heir with Christ.

I am adopted!  This is not a negative.  Many times throughout history adoption has been looked at as a negative.  It’s been something that has hidden in the shadows.  Adoptive parents sought children who were the same race and they purposely kept the child’s true identity a secret from those children.  This lead to feelings of being an outsider or outcast by those children when they became adults and found the truth.  I am thankful that much of the old way of doing adoption has changed, but I feel the negative connotations persist.  If we look with the eyes and heart of the Father we can very clearly see, adoption is anything but negative!  Jesus was battered and bruised, and ultimately died in the most excruciatingly painful of ways simply to bring us into his family.  Adoption is costly!  For us that looked like time and money, for Jesus it was His life.  Adoption is redemption.  Simply put, the Gospel is an adoption story.  God loves humanity so much that he gave His only son to take the punishment for us so we can come close.  We are not second best, but full heirs with Christ.  Adopted means chosen, loved, and valued.  Jesus paid a high price to rescue me, and I will spend my life pouring out my love for Him.  I can think of no better way to spend my days.  I am adopted and loved.  I am a daughter of the King.